Beth, Kelton and I left out of Norman and headed towards Woodward. It seemed like the place to be was near Buffalo, so we headed there and watched some storms struggle. Eventually we headed over to the storm near Protection, KS which sat nearly stationary for quite some time.

We had some hail, some beautiful pictures and then a run in with some flooding which left my car in a non drive-able state. Luckily JR was nearby and was able to help us to safety and tow the car to Protection, KS. JR gave us a ride home back to Norman. 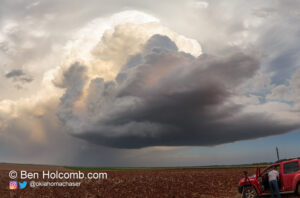