The chances of severe were low on the 10th, however, a slight risk on a weekend day is hard to ignore. I woke up Sunday morning and picked a target of Hobart, OK.

I decided in the afternoon to head out, and head after some storms which were west of OK City Metro, near Carnegie and moving northeast. These storms were definitely not much of anything, and pretty much died off. I had gone north out of Anadarko and was watching to my west where a storm seemingly was firing.

I decided to head west towards Cordell, since the storms were firing near my target of Hobart.

By the time I had gone south towards Gotebo, the storm had definitely lost it’s good rotation characteristics, although there was still a strong RFD blowing up dust south of Gotebo.

I went east of Gotebo then north. I followed the core east towards Mountain View and then along State Highway 9 towards Carnegie. The storm produced some better hail in Carnegie and just east of town. I measured 1.5″ hail with a ruler.

I got ahead of the storm again and headed to the Anadarko Walmart, where I ran into Chris Sanner on the west side of the parking lot. We watched the storm come in, and finally headed out when the storm made it to Anadarko.

I decided to mostly start heading home at this point, and went through the town of Anadarko in the heavy rain with very light hail. When I got onto US62 and started getting on the east side of town, the rain, wind and hail picked up. Amazing amounts of 1″ hail fell while winds gusted to 60 mph. I had to pull over because I was unable to see in the heavy rain.

Ben Holcomb is a Storm Chaser and IT Professional that lives in Oklahoma. Ben works as a Linux Cloud Engineer. He has observed over 200 tornadoes since 2007 and has appeared on most national and some international television news networks. Ben loves to travel and has been to all 50 states as well as 19 countries and 38 national parks. 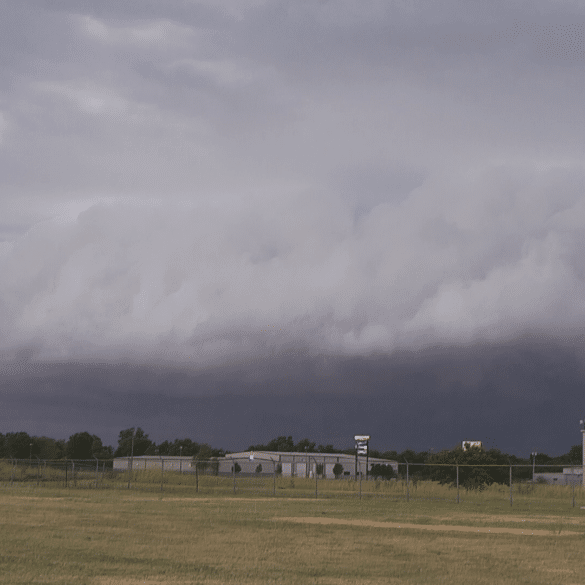