I bought and picked up a new-to-me Ford Explorer the day before this chase. I got the Explorer home in the evening and worked on wiring it up until 3am. This would be the maiden chase for the Explorer.

I didn’t leave particularly early since I was up late wiring the Explorer. We picked up Leia and headed west on I-40 towards a goal target of Pampa.

As we were heading west on highway 152, storms growing to our south started looking favorable. Luckily, we had aligned ourselves pretty well to get in front of the storm.

We headed south on highway 273 to I-40 again and west to 291. Unfortunately, the road network to the south there sucks, but I was an optimist and thought the storm would organize and drop before crossing that road. Once the storm crossed the road, I’d have to backtrack 10 miles north on a crap road to I-40 to go east.

Well, as you’d expect, the storm organized but not well enough. Picture 1 below shows the story. As the storm crossed 291, it apparently dropped a tornado that seemingly most chasers out that day saw. I was busy trying to haul ass north to I-40.

Tornado between McLean and Shamrock

As everyone was watching the tall tornado, I started heading east fast to get in front of everything. I got to exit 152 and exited I-40 and headed north. There was some sustained rotation to our west which turned out to be the start of the Wheeler, TX tornado.

Unfortunately roads suck and we were unable to continue north. Instead I dropped a few miles back south to I-40 and east to US-83.

I headed north on US-83 until Twitty. The best chance to get in front of this thing was to take highway 592 through Kelton and back to 152. We slid up the 28 highway right at the state line and dove right into the core of a HP supercell. There was a brief incident where we were in a quick windshift and perhaps the outer ciruclation of the Wheeler Texas tornado as it headed off towards Oklahoma.

I then thought it’d be a good idea to drive down this crazy looking road on streets & trips. The road existed and I got about 3-4 miles in when there was just a fence at the state line. No way around it.

This event was extremely high moisture, with HP supercells dominating the day. We ran into a lot of flooding as we back tracked, which also made everything a pain.

Eventually we got to Allison and then into Oklahoma. I found a gas station as we tried to catch up. We needed some juice if we were going to make a run east. As I started pumping gas, the power flicked off then back on, resetting my sale. I ran my card again before everything went dead.

We’d spend the next hour looking for gas in Western Oklahoma as we slowly made our way back towards I-40. We ended up finding gas in Weatherford with only 8 miles to E left.

Links to other storm chaser recaps 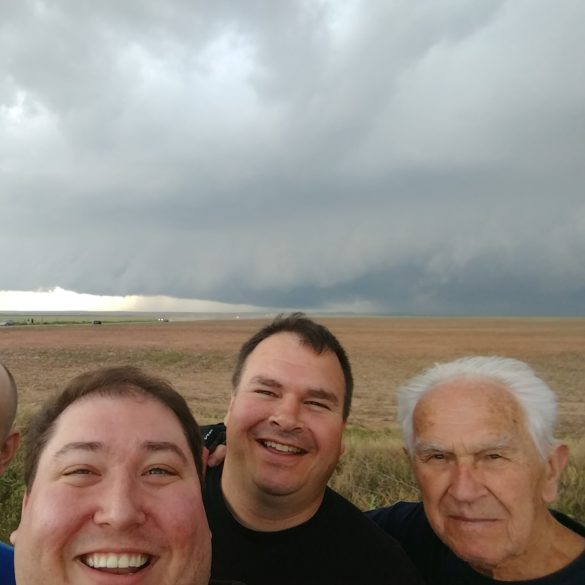 Supercell along the Red River