Annular Solar Eclipse on the Texas/New Mexico border on May 20, 2012 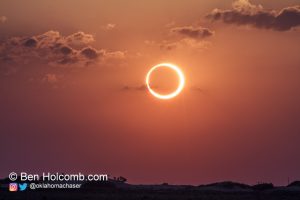