After starting the day off in Moore, I was going to a target of Sayre to Shamrock again Sunday. Pretty much the same target as the day before. After looking at some surface obs, and some models, I decided that the better play would be further south near Childress, TX. Who figured this would be a high risk bust?

After grabbing some Sonic in Moore, I headed down I-44 and shot west on US62 to Hollis, OK. I sat in Hollis for a bit of time.

A cell started popping just south of the Red River, and I decided to head southwest to Eldorado. As I was driving, the cell fell apart on radar. I decided to continue south into Texas, meeting up with David Drummond in Quanah. We shot east to Vernon and then south to intercept the cell coming up from near Crowell. This was the cell we stayed on for the rest of the day.

The cell started getting somewhat organized and dropped a cone funnel south of Vernon before dissipating. JR Hehnly met up with us while we were on the side of the road watching the storm. He stuck with us for the rest of the day. We topped off our tanks in Vernon and then headed up towards Frederick. The cell cycled up just west of Frederick, putting down another wall cloud and a momentary funnel before dissipating again.

We followed the supercell up to Snyder, and yet again it cycled and produced a big beefy wall cloud. We observed quite rapid rotation. I was convinced the cell was going to produce right then, but as before, the wall cloud fell apart and dissipated. We headed north and decided to shoot east through the wildlife preserve. This allowed us to try and get back in position without having to core punch. We got north to SR-19 and then took 58 north to Carnegie, OK. We observed some power flashes to the west of 58, but nothing in the clouds above.

Once the storm rolled into Carnegie, it dropped a huge funnel that I thought for sure was going to touch down. Again, as before, that dissipated and then the cell started to die down as it was being influenced by the line of crap behind it. We gave up in Binger, OK when the storm pretty much turned into a blob. The drive back to Lubbock after this chase seemed pretty long that night. A true high risk bust. 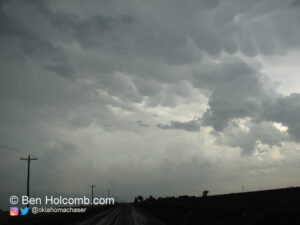 Supercells with hail in New Mexico