After busting on Thursday, David and I stayed in Childress, TX. After a tasty breakfast on the Friday morning, we hit the road for Vernon, TX. We topped off the tank at Walmart, then went in to get a few items we needed.

Anyway, we started south towards Seymour. A Tornado Watch was issued, and then cells started initiating shortly thereafter. We shot south past Seymour and towards Haskell, arriving in the outskirts of Haskell as the cell went Tornado Warned. We observed a real good wall cloud and funnel cloud as can be seen in the video.

We punched south of Haskell, towards Stamford and observed the wall cloud and funnel cloud for quite awhile before hail started to fall. I got some decent pictures of the structure, and some RFD winds. We had to move south again, and flipped around into the opposing traffic lanes before observing a dust swirl under the wall cloud/funnel cloud previously mentioned.

Eventually that was cut into by the RFD, and we got south into Stamford, and then positioned for another intercept south of Stamford. The cell started looking poor at that point, so we made the decision to head back north towards the other cell which had fired near Seymour.

We headed up north and then ended up near Throckmorton where we sat and met up with Craig Curlee, Erik Burns and Connor McCrorey.

A cell fired to our west again near Haskell, and we went west to intercept, and then dropped south in front of the hailcore. We observed some more wall clouds before dropping south again. Eventually we positioned for lightning footage and lightning pictures before giving up near Albany, TX.

Base of the storm with a wall cloud
Storm near Seymour, TX
Supercell structure 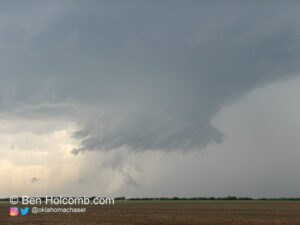