The models before the Rowlett tornado event were showing strong signals for a significant severe weather episode around CHristmas. The pattern for severe weather was looking very good for at least a few days prior to the event, and was given an outlook all the way from Day 5 to Day 1 by the SPC. A strong upper level pattern with resident bermuda high pumping moisture in, multiple severe weather episodes occurred this week including the 23rd in Mississippi and Tennessee and the 25th in Alabama.

An upper level trough was hitting the west coast and produced tornadoes in California on Christmas Eve the 24th. I knew this would be a good omen for tornadoes in the plains as this system came out as a positive to neutral tilt trough, becoming a cut off low by Sunday the 27th.

I was targeting near the Dallas/Fort Worth area in the days previous and even the morning of, I thought a target near Denton, TX would be a good starting point. I headed down I-35 and made it to Denton before realizing I probably needed to be a bit further south. Many storms were firing even to my north and west, but the best storms were down near Temple, TX.

I headed down I-35W where I got stuck in construction traffic north of Fort Worth and ended up deciding to take 820 to 20 to get east of DFW to intercept the storm coming out of Waxahachie. It was tornado warned and had very good structure on radar.

I headed down US 175 and intercepted that storm, seeing a nice but not very organized wall cloud. It was moving pretty quickly, so I didn’t keep up with it for long. I dropped south of Kaufman for the initial intercept, and by the time I got back through Kaufman it was racing away from me, so I decided to drop east towards Canton.

I ran into Connor at some point along TX-243 west of Canton. We both got a good view of the next storm I would chase for the next few hours near Canton and it seemed to have decent rotation again. It looked better organized to me than the original one, so I headed northeast with it watching it cycle multiple times. I crossed I-20 then eventually got a real good look at it on the bridge over the Lake Fork Resevoir. I thought multiple times it might wrap up and produce a tornado, and it even seemed to produce a funnel shortly after the reservoir, but it never could get it done.

I ended up in Sulphur Springs at I-30 and filled up with gas and kept after it a little bit longer before dropping back to I-30, just looking for a route to get me home. I was thinking I could take I-30 back west to Greenville then drop west on US380 and perhaps intercept the stuff coming out of Dallas.

As I headed west, things started looking better down on the storms near Maypearl and Midlothian, so I stayed westbound on I-30 towards Dallas. Multiple confirmed tornadoes in Midlothian and south into Dallas metro area near DeSoto had me flying, and figuring out how to intercept the main circulation. It seemed like I wouldn’t be able to make it to downtown Dallas in time, so I was hoping to take 635 around the loop and catch it on the north side. Luckily the rotation pretty much subsided before it got to downtown, but the storm cycled and spun up a new circulation to the east near Mesquite/Garland. From that the Rowlett tornado would form and track northeast.

Luckily I was nearby in Garland, and was able to head northeast and then east and intercept in Rowlett. Huge power flashes kept me updated on where the tornado was, although it got eerily dark as the tornado moved across Lake Ray Hubbard.

As soon as the tornado crossed into Rowlett, huge power flashes continued as I headed east down State Highway TX-66. I got as close as a mile to the tornado before being cut off near Dalrock and SH66. Lots of debris everywhere left the roads impassable, and there was debris, car and ripped apart houses everywhere so I started helping others at the scene search cars.

Transport to hospital in Garland

At some point quickly after I parked, the electrical lines next to my car attempted to re-energize, blowing a huge electrical surge into the ground and spraying sparks all over my car. One lady who was in shock and trying to get through started screaming. Her name was Marilyn, and she had been hit by the tornado in her car. She was bleeding and covered in glass, dirt and everything else.

I got her in my car and drove her to the Baylor Medical Center in Garland, TX where I realized one of my tires was flat. I took her into the emergency room so she could be checked up on by doctors, and Connor and his sister Kathlyn met up with me and helped me change my tire (I was a gimp, having tore my ACL a month prior in Finland and still awaiting surgery) and then we headed to his parents house in Plano.

I got a hotel room in Addison with the intention of getting my tire fixed on Sunday and heading home. Unfortunately, the tire shop I took my car to on Sunday was unable to fix/repair my 2 tires that were bad, so I had to wait until Monday to get my tires replaced under road hazard with Discount Tire. 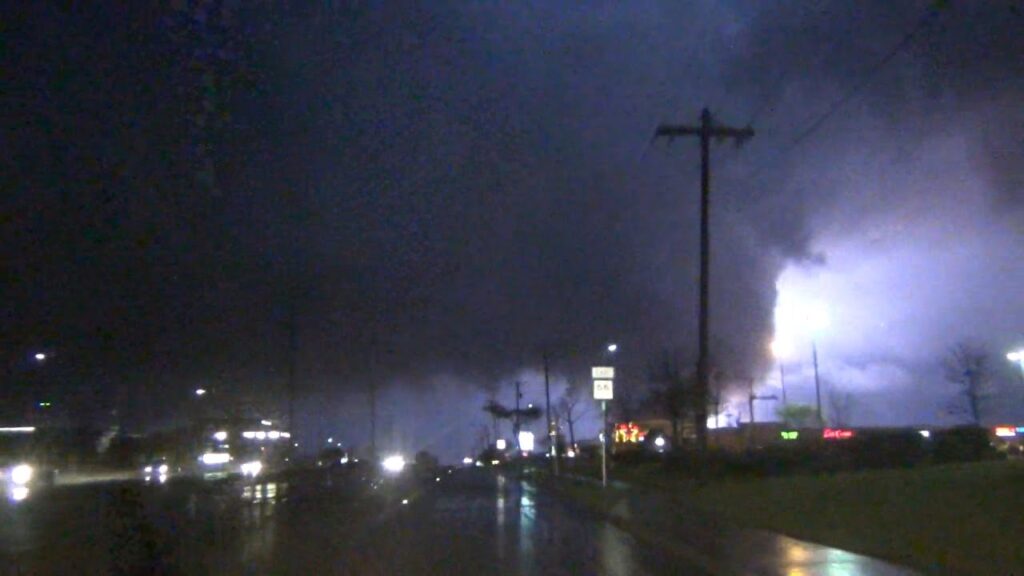 Ben Holcomb is a Storm Chaser that lives in Oklahoma. He has observed over 200 tornadoes since 2007 and has appeared on most news networks. Ben loves to travel and has been to all 50 states and 19 countries.