A weekend trip to Calgary, Canada to visit Banff and Jasper National Parks in the Canadian Rockies. This was my first trip to Alberta, and it did not disappoint. Since it was the middle of September, the weather was a bit chilly, but overall very pleasant.

This was a whirlwind visit, flying in on Friday night and immediately seeing a small aurora show. We just had to drive to Balzac to get out of the Calgary city lights. This was by far the most incredible set of auroras I had ever seen in my life.

With us being up late looking at auroras, we didn’t get onto the road until about noon. We basically drove through Banff National Park and Jasper National Park up Icefields parkway and spent the night in Hinton. There was an even greater aurora show Saturday night, however, we were clouded in and could not see them. We could, however, see the glow behind the clouds. They were super bright in Alaska that evening apparently.

The next day we woke up in Hinton, AB and drove to Jasper National Park. Basically a reverse route of the previous day, heading southbound until sunset. We witnessed the biggest elk I had ever seen in my life near Jasper.

We had early flights on Monday back to Oklahoma. Alberta is an incredible place, and I’ve already planned another vacation up there in July 2016. 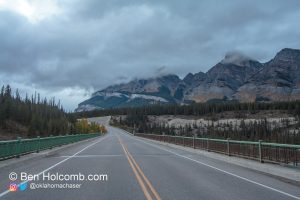 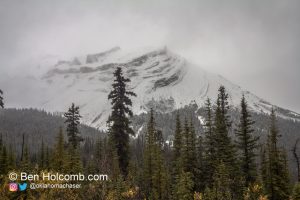